No Longer available on app store

RGB The Game is an exciting iOS game, where you dodge countless obstacles, smash through walls, and collect orbs to purchase upgrades in your future adventures! 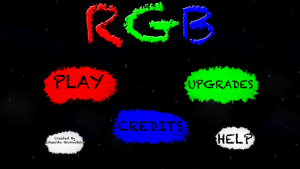 Soar through space as you frantically avoid obstacles and smash through walls. Don’t fall behind or you will be crushed and shattered into a million pieces! Collect orbs along the way in order to purchase upgrades that will aid you in you future adventures!

My work and accomplishments include: